Your Were Made for a Mission
Jayne C. Crisp

A few years ago, when my church—Reidland Baptist Church of Paducah, Kentucky—devoted several weeks of study to The Purpose Driven Life, Rick Warren’s bestseller, my faith was renewed and my life transformed by this spiritual journey.   Not only was I reminded that “it’s not about me,” but I became convinced that “it is impossible to do everything people want you to do.  You have just enough time to do God’s will” (Warren, 31) And, His Will includes specific purposes, one of which is becoming a “world-class Christian.”  To miss His Will means becoming a “worldly Christian.”  (Warren, 297)  World-class Christians find their mission and their God-given passion.   This study sparked within me a desire to travel abroad and share His Love.  So, in February of 2007, when I was introduced to Teresa Fillmon and the ministry of His Kids, Too!,  I knew that very day that God was speaking to me about my mission and the passion He has given me; and I volunteered to become part of the ministry team to travel in October 2007 to Ukraine.
Upon our arrival in Dzerzhinsk on Sunday, October 7, we visited the Internot (orphanage for older children) and shared snacks and songs, but more importantly, God’s Word and His Love.  The children present were hungry—not only for the treats we brought them, but also for the warmth of human contact.  Church at Teresa’s Dzerzhinsk home followed in the afternoon, and American and Ukrainian hearts became as one as we worshipped together and then fellowshipped over dinner.  Pastor Victor gave team members an opportunity to introduce themselves and tell why they came to Ukraine.  I acknowledged to that small congregation (as well as to myself) that I didn’t know for certain what God had for me to do, but that I was available and willing.  What a joy it was to see Him take me at my word!  My role emerged over the next 15 days—from sorting clothes for the children at the Internot, holding and playing with babies and toddlers at hospitals and orphanages to developing presentations for team members and serving as projectionist.  Every day was a new adventure, and the blessings flowed! 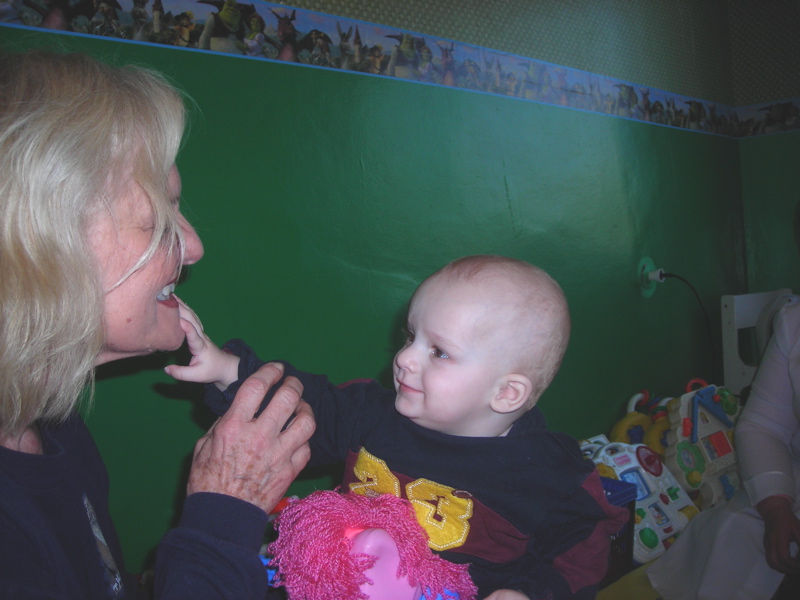 This endeavor was not without tough times, though.  As you read in the November newsletter, one of our team members experienced health problems that made it necessary for three of the team to return to the U. S. a week earlier than planned.  On Tuesday of the second week, Sundy Goodnight and I were distributing clothes and shoes to orphans at the Internot in Dzerzhinsk.  Many of you who are reading this newsletter had sent clothing for these children whose faces and sizes are unknown to you as they were to us.  When we realized that we were unable to outfit several children, we were broken heartened; it seemed so unfair for the children who have so little to go away empty handed.  However, the youngsters did not complain, cry, or even hint that they thought they had been slighted.  Nonetheless, Sundy and I embarked on a shopping trip to the Metro Market and to the open-air Central Market to buy clothes, toboggans, and shoes.  We, also, returned to the “Summer Kitchen” storage area to find specific items of clothing.  Two days later, we returned and, with the help of the Internot staff, were able to locate most of those who had not received clothing.  I can still see the smiles that came to their faces.  One of the teenage boys who attend Bible class at the Internot impressed me greatly; he kept bringing younger boys to us to get clothing; not once did he ask for anything for himself.  He deserves credit, also, for setting a good example for the younger children by being attentive during Bible class.  We feel certain that he has been influenced greatly by male role models like Walter Steely and Edward Volkov.

The success of the October Mission Trip came because of the sovereignty of our God and Creator, the prayers of hundreds of Christians across the nation who petitioned daily, and the generous monetary and in-kind contributions that were made.

Praise God!!  My life will never be the same!  To God be the glory for the great things He has done, but much remains to be done.  Please note in other parts of this newsletter the specific immediate needs of His Kids, Too! I challenge you to let God reveal His purpose for you in this ministry and wherein your passion lies.  I am confident that He has called you to be a world-class Christian and that you were made for a mission!